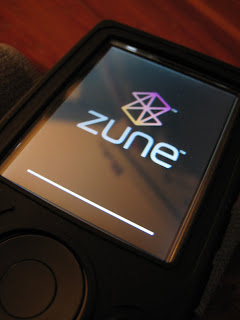 Well, I was going to load up my Zune with the corrected files I've fixed so far so I could have some tunes for tonight if the kiddos fall asleep early. Unfortunately, Microsoft missed something when they created the Zune 30g. An ugly 'leap-year' bug has frozen everyone's Zune who bought one in 2006. All you see is the lighted Zune logo on the screen. How do I know this? I asked uncle Google.

But, just as quickly as everyone began complaining this morning, Microsoft gave us a fix! Hooray!!

Wanna know what the quick and easy fix is?

...... wait until tomorrow at noon. Yup. That's it. Old Zunie is fast asleep for a while. According to the makers, the internal clock will reset itself. All I have to do is make sure the battery drains, recharge it, then turn it back on.

Why do I have a sneaking suspicion that this little 'fix' is really just a ploy to buy more time for the techs to create a REAL fix? 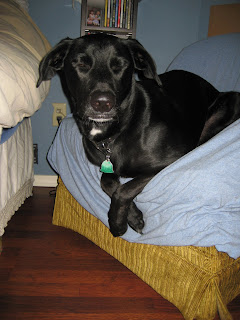 What else has been going on with me you ask? Even if you didn't ask, here's the answer.

On Sunday, I took Maverick to the vet because on Saturday he looked like he had pink eye. I gave it a day to clear up, but it looked worse - so off we went. He got some eye drops that I have to give him for the next two weeks, but he looks better already. I'm glad he's not pawing at his eyes because he'd look pretty silly in a cone.

Also, I'm pretty low-key about my break, so I've been taking time to fix my mp3s from the great Zune scramble of '08. During one of the software 'updates' all my music got messed up. I had Third Day singing Sk8er Boi on the Best of Perry Como album. Nice eh? I have nearly 4,000 mp3s in my collection. I'm going through them one album at a time and re-entering all the proper information. I'd say I've fixed about 20% so far.

I've also been spending a bit more time with my guitar, so my fingers are getting all peely again. I'm attempting to add some lyrics to a chord progression that I put together a while ago. AKA writing a song. PS- I thought it would be artsy fartsy of me to have a name for my guitar, so suggestions are welcome.

I've started reading John Bunyan's The Pilgrim's Progress. Haven't gotten too far, but I'm enjoying it. I guess I didn't realize it's written like an allogory. I like allogories. It was supposed to be my goal to finish it before school started up again, but we'll see. It's a big book.

I am now onto the 5th and final season of Quamtum Leap. They re-recorded the opening theme song for this season and it sounds really stupid. What were they thinking?!

Mike Lynch has been dog sitting for the past week for some folks in my neighborhood so I've gone over there a few times to kick some butt at TimeSplitters. Actually, I didn't play the video games as much as I watched. It was a nice mix up of my daily routine of doing nothing.

Oh, and the other night Jami came by and helped me play some games on my computer. It was jolly good fun and now I'm addicted to Diner Dash. Good thing it's only a free trial and will eventually stop working.

So as you can see, my 'break' wasn't just a break from school. It was more like a break from reality and responsibilty. I'm gonna hate to see it go.

Tonight I will be babysitting for a friend as I ring in the new year. I think it's gonna be a blast, I've never spent New Years Eve with youngsters. Bring it on! 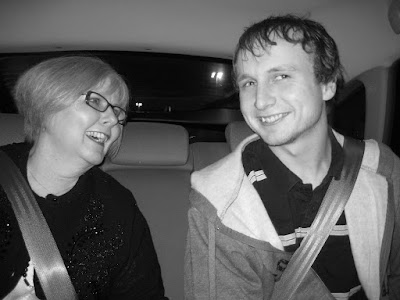 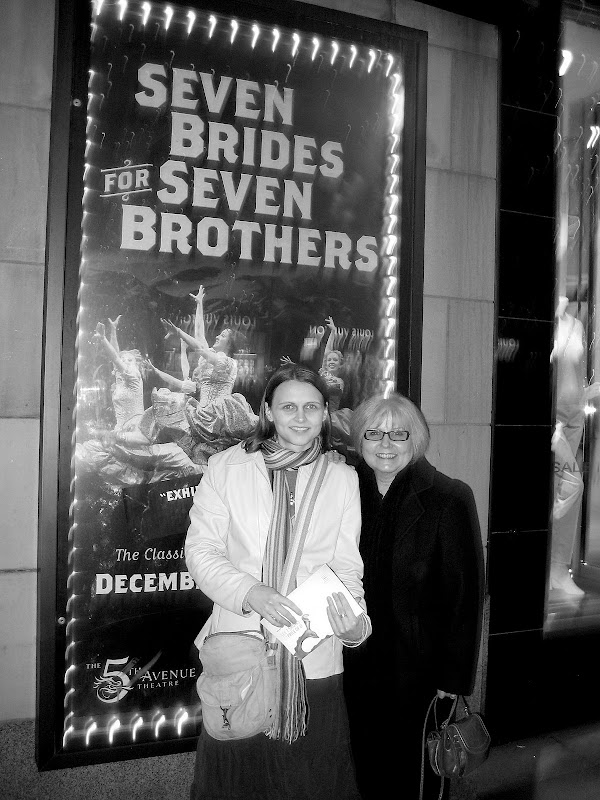 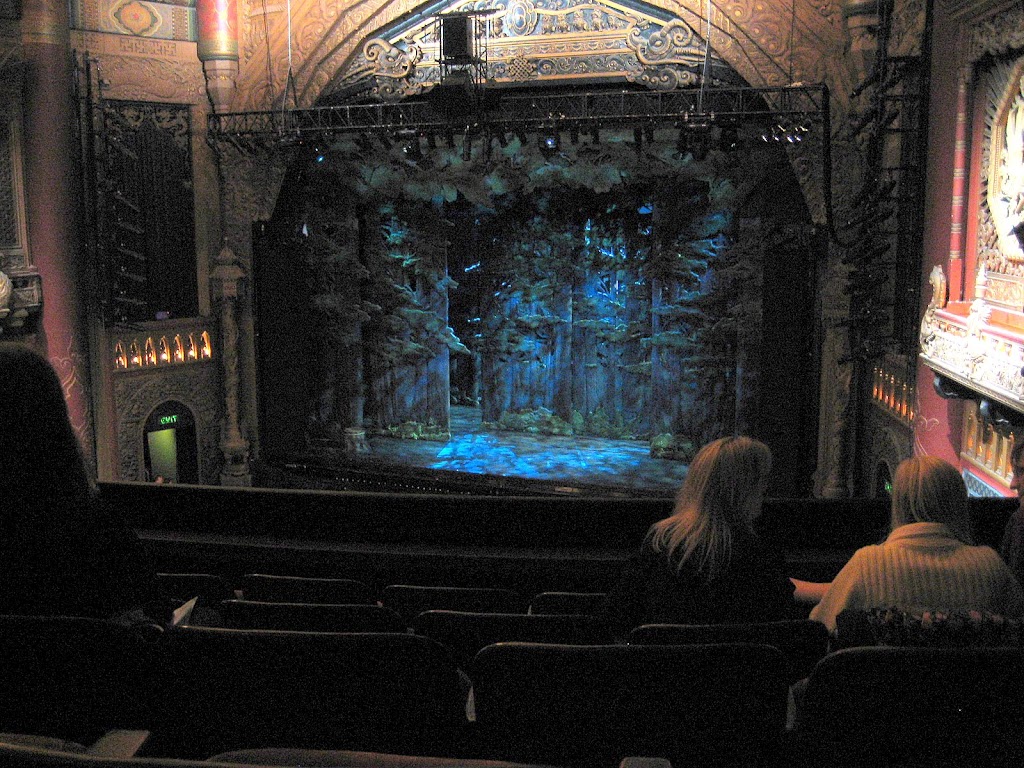 This was a much happier ride to Seattle than the last one. For one, we weren't all hungry. And for two, there wasn't any reason to worry about the roads since the rain came through and washed away the snow.

We got there with plenty of time to grab our tickets and a snack before settling in our seats. John snapped this quick photo which held up the line for a moment.

Mom and I watched as the rows in front of us started to fill up and we feared someone with large hair or a long neck would sit in front of us. Eventually, the two seats in front of us were pretty much the only open ones left in our section. We watched a this really tall couple pointed down our row and started our way. We lost all hope. Suddenly, they stopped in front of another couple and flashed their tickets saying "I believe these are our seats." After some shuffling, the tall couple was not going to be in front of us. The lights went down and to my delight no one ever filled those seats! Although, I did take a moment to have some pity on the folks who might have been sitting there. You never know why they didn't make it.

The set workings were awesome! Here's a shot of the opening scene before the lights went down. I didn't want to infringe on any rights so I didn't take any photos of the play. It was a really entertaining show, but it just didn't do everything for me that the movie does. In the play, my favorite brother was Frank. I guess I was a bit sad that the kid who played Gideon didn't steal my heart like Russ Tamblin does. I did enjoy how some of the lines were played more for humor than they are in the film and it was really great enjoying those moments with a TON of people.

I think I'll go watch the movie now. I got it on DVD [widescreen] for Christmas!
3 comments:

Email ThisBlogThis!Share to TwitterShare to FacebookShare to Pinterest
The two seats right in front of me are totally empty!
2 comments:

While organizing my sheet music and guitar books, I found this random index card with this poem scratched on it:

The time sure can fly by, eh? I seem to still be stuck on a dry spell as far as my blog is concerned. Sorry about that - for my daily readers ;) Even now I have no idea what to write. I'm super happy to be on break from school. I was excited to go see Seven Brides for Seven Brothers at the 5th Avenue in Seattle last Thursday, but the weather bit hard. It took two hours to get to Sumner, which usually takes about 20 minutes or so. Thankfully we were able to get re-seated for another showing next Saturday.

Hmm.... what else... I helped Mikey create some gifts for his family. That was fun. Only two days left on my Photoshop Trial. /sniff sniff What will I do without you, Photoshop!?

Oh yeah, I've been stuck on a Quantum Leap kick. I'm on Season Four right now. Sam and Al are quite the team. I look forward to seeing what sort of crazy outfit Al will be wearing from 'the future'. I've been wondering about which event in my life that Sam might leap into to try and change and why. It's sort of a fun game.

Well, I can't think of anything else right now and it is pretty late, so TTFN!
1 comment:

I thought this was pretty cool!

Check out this blog post of someone who is a complete stranger to me.
No comments:

One for the economy.

Well, thank you for the overwhelming response to my hair dilemma. I didn't even know there were 12 people who read my blog. Apparently, you've all come out of the closest to voice your opinions on such an issue I thought was trivial. Perhaps I was wrong.

I feel silly writing such an update, but it seems the people want to know. I've decided to leave my hair how it is. You all seem to like it at a longer length, even though it drives me up the wall. 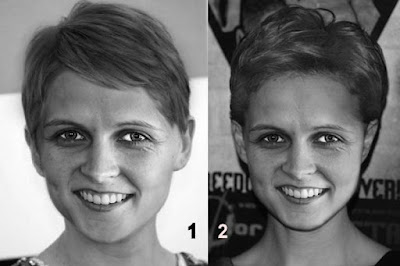 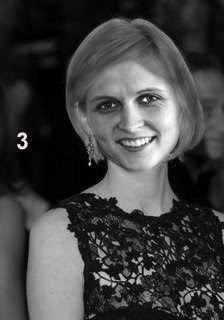 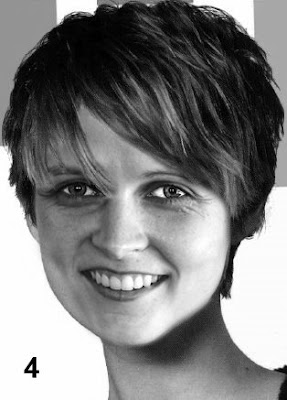 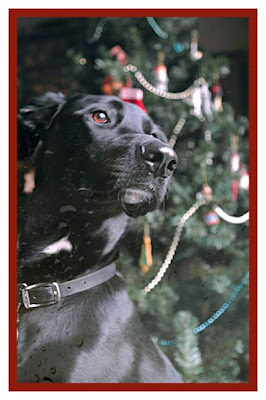 There was some beautiful lighting coming through the front of the house this evening so I grabbed my camera and a plate of food and ended up with this shot. I also used some Photoshop skills to get the look I wanted.